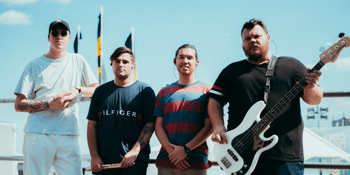 with Blessed & Congrats
The Triffid (Newstead, QLD)
Thursday, 13 February 2020 8:00 PM
26 days away
18 Plus
Metal / Hard Rock
Send this event to
After a tidal wave year on the back of their critically acclaimed third full length album The American Dream and breaking the triple j Hottest 100 with their single You Can Count On Me Trophy Eyes have announced the Figure Eight Tour  which will see the group bring with their explosive live show and emotionally driven genre defying songs to the east coast this Summer.
Giving fans their first chance to see the anthemic powerhouse on an Australian headline tour in over a year, Trophy Eyes have spent the time selling out dates globally, touring with the likes of Bring Me The Horizon, DMAS, Billie Eilish, The Story So Far & The Used along with setting alight some of the world’s most renowned festival stages.  The Figure Eight Tour will feature the band’s most electrifying lineup to date. Joining Trophy Eyes are two of their favourite genre bending artists right now. Bridging the worlds of punk and hip-hop, Sydney, Australia's BLESSED is a guitar-wielding rapper, singer, and producer inspired by Jimi Hendrix and Kanye West, making waves around the world for his unique approach to hip hop. Melbourne’s Congrats is the colourful yet emotional pop project from super-songwriter Ben Stewart of Slowly Slowly. The Figure Eight Tour is set to be one hell of an exciting whirlwind.