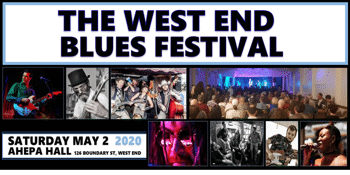 The rich history of West End blues and roots music continues with the return of last years Sold out event! In a joint effort between Dillion James, Club Limbo, BASEQ & Ahepa Hall - some of West End, Brisbane and Australia's sharpest blues personalities and their bands will share the stage for the next bi-annual 'West End Blues Festival' in 2020. Artists: Darren Jack (Syd) The BlueSkillet Rovers (NSW), Blind Dog Donnie, The Dillion James Band, Crescent City Players, Asabi E. Goodman, & Dishpanhands. The Blues Association of South-East Queensland 'BASEQ' will open the doors to the Ahepa Hall, 128 Boundary St, West End, at 3:30pm with the music kicking off at 4pm. Proceeds raised during the festival will go towards BASEQ's inaugural Youth In Blues program, commencing later in 2020. Darren Jack Multiple award-winning Australian Blues musician Darren Jack has been electrifying audiences with his signature powerhouse Rock ‘n’ Blues and original music for over twenty years. Darren first fired up the Blues scene as the driving force behind award-winning band Third Degree. After six years fronting the band, Darren ventured out as a solo artist and for the past 13 years has collaborated with some of Australia’s finest musicians, touring throughout the country thrilling audiences with his passionate performances and proving why he is regarded as one of Australia’s top Blues musicians. BlueSkillet Rovers After wow'ing Woodford again in 2019 with 4 standout performances including a coveted midnight NYE Slot and a closing slot at Bluestown, they're back in Brisbane this May for one show only. Transporting you to the early days of blues and jazz with their foot stomping, thigh slapping, smile- inducing, good old fashioned happy music, The Rovers play skiffle or jug band style instruments mixing up Jug blues, Jazz blues, Rag blues & Silly Blues! Blind Dog Donnie & Band Blind Dog Donnie has been hailed as Brisbane's finest exponent of blues guitar. As a founding member of legendary blues bands, The Howlin’ Moondoggies and Li'l Fi & The Delta Rhythm Kings he toured extensively and twice had the honour of supporting and jamming with the great B.B. King. Since then Donnie has gigged extensively with his own band further exploring his funky-blues repertoire. Their piercing originals and creative re-imaginings of songs from the blues/soul canon are appreciated everywhere, from local pubs to festival stages. He has a live album out on West End's Rudekat Records. His appearances may be getting a little rarer but Blind Dog continues to deliver a unique sound and energy that folks can't get enough of. The Dillion James Band Whether holding the spotlight in his own right or slotting in as a session musician, Dillion's ability to tickle the ivories has long been recognised within the music industry. With roots firmly embedded in New-Orleans flavoured Blues Funk and Reggae, if you can dance to it, the 2010 BASEQ blues performer of the year can play it. Don't be surprised if their show turns into an all star jam with very special guests. Crescent City Players This big band bring their New Orleans inspired Bluesy Jazz n' Funk to the party - transporting you to the heady days of Mardi Gras! A potent concoction of blues, jazz, funk, soul and R&B mixed with a pinch of extra nasty and a dash of honky tonk, there really is nothing like the music of New Orleans to make you feel like celebrating this little thing called life. Asabi E Goodman Asabi currently fronts the Brisbane based covers band, "First Summer," is a featured vocalist in the Blues Brothers tribute band, "The Soul Men," and is the voice behind the newly formed, "Andrew, Asabi, and Friends," providing a New Orleans style jazz and blues sound. She is also a regular at West End's 'CHURCH' - a collective of very talented musicians versed in the abilities of on-the-spot stylistic improvisations. Matt 'Dishpanhands' B Music Rounding out the bill are the exciting next gen players in DishpanHandsBluesBand! With Matt Beagley and the lads on the case the future of the blues is in safe hands.

With acts playing from 4 til 11.30pm the mad dash to grab a meal in between sets will be made easier by the Boundary Street Markets Food Trucks on the same block (open 4-10pm) along with an array of fantastic restaurants with a stones throw of the venue.