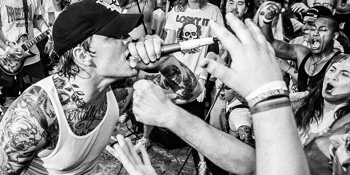 Baltimore's favourite hardcore sons, Trapped Under Ice will return to Australia this April / May.

Formed in 2007, Trapped Under ice consists of guitarists Sam Trapkin and Brad Hyra, bassist Jared Carman, drummer Brendan Yates, and vocalist Justice Tripp. After self-releasing a demo, the band signed to Reaper Records and released their Stay Cold EP in 2008, followed the next year by their debut album, Secrets of the World. The band toured constantly, eventually traveling the world and winning over new fans with their boundary-pushing hardcore style. In 2011 they released their second album, Big Kiss Goodnight. Following another round of relentless touring in support of the album, the band went on hiatus in 2013, but returned to playing shows two years later. The newly rejuvenated Trapped Under Ice released their third album, Heatwave, on the Pop Wig label in 2017.