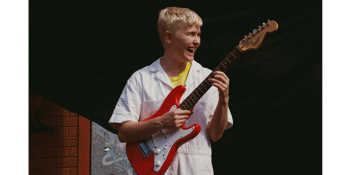 Alex The Astronaut - 'How To Grow A Sunflower Underwater' National tour

The Cambridge Hotel (Newcastle, NSW)
Saturday, 20 August 2022 6:00 pm
9 days away
18 Plus
Music
Australian Artists
Indie
Send this event to
Singer, songwriter and storyteller ALEX THE ASTRONAUT has unveiled Australian tour dates in support of her forthcoming album
'How to Grow A Sunflower Underwater' (out July 22) and released the video for her latest single ‘Haircut’. In her first Australian tour
in almost four years, Alex the Astronaut will play 10 headline shows with a full band around the country this August and September,
plus performances at Splendour in the Grass, River Sounds and Springtime Festivals. Tickets are on sale now from alextheastronaut.com,
with special guests to be announced.

Inspired by the reflection that came after Alex the Astronaut cut off all her hair for charity, ‘Haircut’ celebrates personal growth and the
journey of self-discovery with your friends. The wildly bubbly and upbeat track has been named in The Guardian’s Best New Music for June,
added to full rotation on triple j, received airplay on BBC Radio 6 Music, and spotlighted by The AU Review, NME and Music Feeds among many others.

With over 25 million streams and over 2 million views on her music videos under her belt along with adoring media fans at The New York Times,
NPR, BBC Radio 1, triple j, The Guardian and The Line of Best Fit, Alex the Astronaut has captured hearts and fans around the globe.