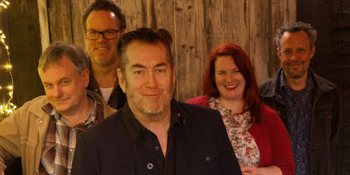 Lefty's Old Time Music Hall (Brisbane, QLD)
Saturday, 7 March 2020 6:00 PM
18 days away
18 Plus
Folk
Send this event to
Mick has always been pretty good at taking care of his past but with this new band he finally seems to be taking care of his future.’ So writes Caroline Moore, current director of the Port Fairy Folk Festival. And it with an unshakeable sense of optimism and creative clarity Mick and long time collaborator Mark Squeezebox Wally approach the next phase of a career as intriguing as it is enduring.

On the back of a successful autobiographical book (These Are the Days) and an expansive highlights album (These Are the Songs) in 2018 Mick and the full Roving Commission band travelled to Memphis Tennessee to produce the album Coldwater DFU - rated by many as a career defining piece of work.

Not content with the critical acclaim received for that release Mick is forging ahead with a graphic novel to accompany the record (Coldwater Chronicles), an animated film clip for the track Anything You Recognise and a delightful covers record Bipolar Request - the by-product of a crowd funding campaign where people could pay for song requests.

The current line-up of the Roving Commission features some new faces in alt-country songbird (and Three Triple R Presenter) Brooke Russell and bass maestro Ben Franz (on sabbatical from The Waifs) along side Squeezebox Wally and long time drummer Dave Folley (Tex Perkins, Archie Roach). Fine players and performers all.  Running along side Mick’s current band is a whole raft of projects such as the magnum opus theatre piece The Vandemonian Lags (featuring Tim Rogers, Brian Nankervis, Liz Stringer among others). There’s more theatre work in development coupled with the running of a boutique inner city music venue (The Merri Creek Tavern).

It would be too easy for Mick to revive and live his life in the shadow of his iconic seemingly never to be forgotten band Weddings, Parties, Anything but more than ever it comes down to the shows he’s doing now and the songs he is about to write and record - and so let us finish with a quote from a former director of The Port Fairy Folk Festival Jamie McKew:

“ Mick Thomas has some secret magic to his writing…he surely can write great songs that make you say “why didn’t I think of that?” But of course we never do. He can roll up to any crappy stage and make it the centre of the universe to any audience. Mick is the real deal, no doubt about that!”