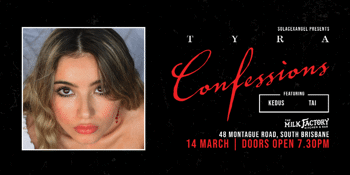 Confessions will take you on a journey of nostalgic release, with each song building upon a unique blend of old-school and modern sounds. Tyra’s honey-soaked vocals and raw, soul-bearing lyrics (largely inspired by the late 90’s/early 00’s R&B/hip-hop scene) continue to work as the foundation of the EP’s overall vibe, however it’s the new, colourful streaks of 80’s inspired synthwave-pop infusing each track that makes Confessions a captivating and graceful step forward in Tyra’s promising music career. In addition to Tyra's upcoming EP, you will also be blessed by her latin inspired tracks where Tyra taps into her ecuadorian roots.

Supporting Tyra are two equally talented Brisbane artists; Kedus - a silky-smooth voice flowing over dreamy, bedroom beats; and TAI, a refreshing addition to the Aussie rap scene as he merges hip-hop, lo-fi, grime, and occasionally reggae beats to the point where no one song sounds the same.