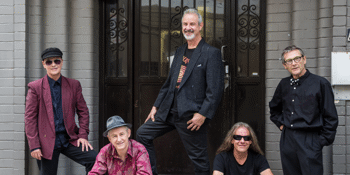 After 35 years on the road, GANGgajang will Take a break from touring.

Fashions come and go in the world of music. A song may be a hit for a few weeks but then it’s gone and the band is never heard of again. Occasionally, an enduring sub-culture will adopt a band, and their music becomes the soundtrack of their life. They pass on their love of the music to the next generation, the bands become legends and their music never dies. GANGgajang is such a band.

Renown for the perennial Sounds of Then (This Is Australia), GANGgajang has been part of Australia’s cultural fabric for over 30 years beginning with their debut single in November 1984. It was the mid 1980’s surf culture who first adopted the band when songs from their debut self- titled album became the entire soundtrack to Quiksilver’s seminal surf movie Mad Wax. Surfers would describe GANGgajang’s distinctive groove and sound as a seamless soundscape to the rolling waves.

In 1986 and ‘87 the Association of Surfing Professionals aka World Surf League voted GANGgajang “World’s Best Band”. They performed in Long Beach California at the U.S. opening for Mad Wax as well as music being included in the film soundtrack of North Shore. The success of Mad Wax took GANGgajang’s music to surfing communities around the world from South Africa to Brazil. Brazilian surf judge Ricardo Chantilly played GANGgajang songs regularly on his half hour radio show devoted to all things surfing. GANGgajang toured Brazil 3 times and in 2001, together with Yothu Yindi, they played to over 20,000 people at a concert on Copacabana Beach.

The Band will be screening “Mad Wax “when they perform at Hamilton Hotel on Sat 25 Jan.