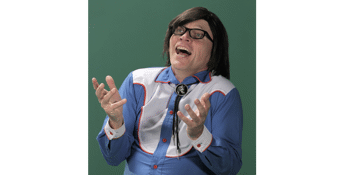 Buddy signed with record label ABC/Universal in 2008 and recorded his first studio album "Its All Goode".This album proved to be the stepping stone for what has become an incredible journey.
In 2011 Buddy released his 2nd studio album"The One and Only Buddy Goode".
With such hits as Jimmy Likes Dick & Dickens Cider it was no surprise ARIA acknowledged his vast talents with a nomination for Best Comedy Release.
This was the catalyst for bigger things to come.
In 2012 Goode released "Unnappropriate".
The album produced his most successful hit song to date..."Cougarville".
This same year Buddy performed at some of Australia's biggest festivals including CMC Rocks the Hunter and the Gympie Muster and even travelled to the Middle East to entertain our troops.
In 2013, "Unappropriate" gained Buddy another ARIA nomination for" Best Comedy Album"...this time winning the award.
2014 also proved to be a year filled with success.It saw Buddy take home the "Mo Award" for Best Comedy Act aswell as the release of a new album ..." It's a Buddy Goode Christmas".
It too won the Aria for "Best Comedy Release"..the first Christmas album in any genre to do so....though Bert & Patty Newton had come close many years earlier!
After releasing his greatest hits.."The #1's & #2's" Goode released his 5th studio album "Songs to Ruin Every Occasion" in 2015.
It too gained an Aria nomination for "Best Comedy Release".
In 2016 Buddy made his television debut on Studio 10" on the Ten Network.
As a result he was asked to join the show  with his own segment throughout 2017.
On release of Buddy’s 6th studio album “More Rubbish” in 2017 Buddy embarked on a very successful national tour.
In 2019 Buddy created the wonderfully admired musical “Wuhan Wuhan” that has yet to hit the road due to Covid 19.
He now sits at home doing nothing !