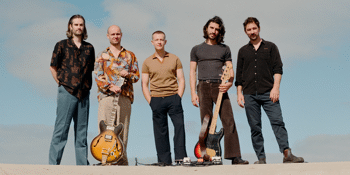 Special Guests
The Eastern (Ballarat, VIC)
Friday, 3 December 2021 7:00 pm
69 days away
18 Plus
Indie
Jazz
Electronic
Send this event to
The demon groove kings, Mildlife are back on the road this winter, bringing their riotously loose-limbed performance to a venue near you. Following a small sold-out run of the east coast earlier this year, Mildlife are returning with 13 shows across metropolitan, regional and festival stages this July - September.

An underground sensation for years, Mildlife quietly emerged onto the scene in 2018 with their krautrock and jazz-infused debut, Phase. Accolades followed the group, with the album receiving nominations for Best Independent Jazz Album at the AIR Awards, Best Album at Gilles Peterson’s Worldwide FM Awards, as well as taking home Best Electronic Act at The Age Music Victoria Awards.

2020 saw the release of Automatic, a follow-up that, like Phase, luxuriates in track length but with more direction and discipline. Automatic sits as well on the dance floor as it does in the living room, with comfortable grooves that span across live and studio dimensions.

A critical success, Automatic debuted at number 8 on the ARIA Charts. The four-piece saw further acclaim from Sydney Morning Herald, Brooklyn Vegan, The Music, Rolling Stone and NME, as well as support from FBi Radio, 3RRR, 2SER and playlists across DSPs.

Adapting to live performance in the chaotic climate of today, Mildlife delivered a one-off performance from South Channel Island, live streamed exclusively on Bandcamp. The band showed off their powerful live chops and ever-cohesive aesthetic to a lucky crowd of fairy penguins, fur seals and white-faced storm-petrel.

Presenting a mixture of chillers and floor-movers amidst acoustic and electronic instrumentation, a Mildlife show is an experience you do not want to miss