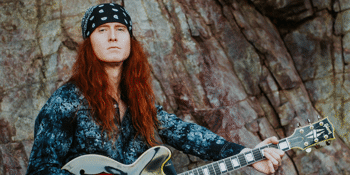 The Lounge (Royal Hotel) (Nundah, QLD)
Saturday, 5 June 2021 8:00 PM
23 days away
18 Plus
Blues
Bluegrass
Rock
Country
Acoustic
Australian Artists
Send this event to
Join the 8 Ball Aitken Band for the official ‘Ice Cream Man’ album launch show on Saturday June 5 at the Royal Hotel, Nundah. The band will play the entire new record track by track and share some stories behind the music.

This is a one-off special night of ‘cool licks’ to celebrate ‘Ice Cream Man’ coming out of the freezer. The title track debuted at #1 on the AMRAP charts, and #4 on the Australian Blues Charts. 8 Ball Aitken recently returned to Australia from Nashville (where he recorded three new albums from home during 2020). 8 Ball's touring Australia for the rest of the year.

“For a guy from Australia, 8 Ball Aitken really has the Delta in his bones… I wouldn’t be surprised to find Mississippi mud on the soles of his shoes.” - Gonzo Okanagan

"A lovely, enjoyable collection, start to finish, with the inevitable few songs that stand out, and invite you to hit the replay. Blues In Britain" – Graham Munn

“A mixture of balladry, wordplay, and cutting edge guitar, Swamp Blues 2 from 8 Ball Aitken deserves to be in everyone’s collection.” American Blues Scene "Swamp Blues 2 is masterfully crafted, and indeed a wonderful listen.

"8 Ball is not an act any band wants to follow! ....even a 5 piece band will have to do some quick and serious note pounding to get 8-ball's vibe off the stage, it just hangs in the air long after he is gone.....he's a freakin solo red headed infector...!" Mitch Lind, owner/promoter of the Riverhawk and Stringbreak Music Festivals, Florida, USA

“This is outstanding. The way it should be done. You have a new fan.” Ray Wylie Hubbard (Snake Farm), Texas, USA