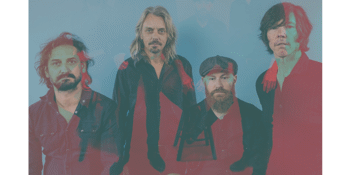 The Great Club (Marrickville, NSW)
Friday, 29 October 2021 6:30 pm
40 days away
18+ (unless accompanied by Guardian)
Music
Send this event to
Pioneering new realms of modern, psychedelic sounds, Lost Ragas release their third album, This Is Not A Dream on 2nd September. Three years in the making, between busy touring and recording schedules, this new collection of stellar tunes showcases the mastery of the band at a whole new level. Cosmic flight, a psychedelic jungle, imprisoned men and boxing legends, dance amongst wild guitars, interstellar pedal steel and triumphant orchestral arrangements. From the opening grandeur of Keeping Up With Yesterday, to the contemplative Morning Star and the joyous jaunt of All My Heroes Are Crazy, Lost Ragas have created an eclectic masterpiece.

Becoming something of a legend in Melbourne, Lost Ragas electrifying live shows are something to behold and their recent Union Hotel residency saw the pub packed to capacity each week with palpable excitement. The highly anticipated new record indicates they won't be a local secret much longer.

Recorded at Union St Studios in Brunswick, engineered and mixed by Roger Bergodaz, produced by Lost Ragas, and mastered by Brian Lucey at Magic Garden Mastering (The Black Keys, Lucinda Williams, David Lynch, The Shins),This Is Not A Dream is available for pre-order on Bandcamp and will be released on vinyl and all streaming platforms on 2nd September.

The kings of Australian Cosmic, the mighty Lost Ragas are Melbourne’s own psychedelic supergroup. Born from backstage jam sessions, co-writes and an obsession with great songs and sounds, the band are a combination of voices, songs, vision and exceptional skill. Each member of the band offers a wealth of experience, and a bend towards the song’s best interest.

Melding soul, country, blues, rock and psychedelia, the band create a live experience that is renowned in Melbourne's music community. After the departure of founding member, Simon Burke, Lost Ragas have welcomed their newest member Haydn Meggitt to the fold.