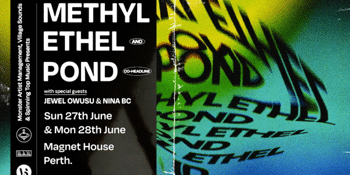 METHYL ETHEL
Methyl Ethel—the nom de plume of West Australian songwriter, producer, vocalist and multi-instrumentalist Jake Webb—makes music that draws from myriad influences and a history of new wave and indie rock, whilst sounding like its own thing entirely. Both familiar and alien, intimate and aloof, you never quite know what you’re in for, but the trip is bound to be enchanting.

Across three albums (2015’s Oh Inhuman Spectacle, 2017’s Everything Is Forgotten and 2019’s Triage) and three EPs (2014’s Teeth and Guts, 2020’s Hurts To Laugh), Webb has proven to be a prolific and masterful purveyor of eccentric alt-pop. Methyl Ethel has attracted two Australian Music Prize nominations, a top 5 Hottest 100 placement with the ARIA Platinum single Ubu, an ARIA Gold single in Twilight Driving and an AIR Best Independent Album award for Everything Is Forgotten.

Over the years, Methyl Ethel has morphed from a solo bedroom recording project into a seven-piece live band, touring extensively at home and abroad. The band has appeared at internationally renowned festivals including CMJ, SXSW, Outside Lands, Strangewaves, Levitation, Green Man, Austin City Limits, Field Day and more. In Australia, they have graced the line ups of Sugar Mountain, Groovin The Moo, Falls Festival, Splendour in the Grass, Yours & Owls, Spilt Milk, A Festival Called PANAMA and Laneway Festival, and sold out headline shows at some of Australia’s largest and most prestigious venues.
"One of Australia’s most essential current bands." - Paste

"Methyl Ethel is one of Australia's weirdest, most beguiling bands, with its endlessly creative frontman Jake Webb nimbly leaping between sounds that draw upon classic pop, shoegaze, and R&B." - Consequence of Sound

POND
“We dedicated ourselves to being these brain-burrowing, commune-dwelling psychedelic lunatics,” says Nicholas Allbrook enigmatic front man of Pond.
Though majoring in strobelight-strapped-to-your-forehead, chain-me-to-a-bed psychedelia, there were other key influences, as diverse as Michael Jackson, Beastie Boys and Led Zeppelin – hip hop, super-pop and ’70s metal.

Welcome to the World of Pond.
At the turn of the 2010’s, Western Australia was going through a boom, counter to the general economic downturn, thanks to the discovery of fresh seams of mineral deposits in its deserted expanses. Perth’s music scene shared in the wealth via government arts funding, so, consciously or not, POND’s collective post-millennial take on sunshine- psych channeled that positive energy locally.

POND was formed during those years as “a Royal Trux-cum-Cream power trio”, fronted by Allbrook with Jay Watson and Joe Ryan. Adding Jamie Terry shortly thereafter and after numerous ins & outs, James Ireland, POND spent the 2020 pandemic recording new music and touring exclusively in their home state of Western Australia for the first time in over a decade.

POND has expanded their performance resumé since 2008 and by 2019 they had performed sold-out headline shows across the nation and extensive tours of North America, Europe and the UK. They’ve performed at a slew of festivals including Coachella, Splendour in the Grass, Glastonbury, Primavera and many more.

“Allbrook, much like Bradford Cox or even Bowie, has a knack for conveying the beauty and madness of the human condition in his lyrics and performance..." - UNCUT

After a short southwest tour in their home state of Western Australia in April, Pond will perform with longtime friends and fellow WA mainstays, Methyl Ethel, for two nights at Magnet House in Perth. A bass-breaking combo you will not want to miss!