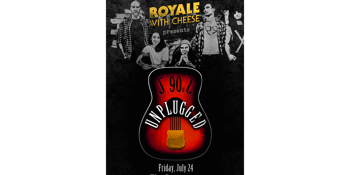 The Basement - Canberra (Belconnen, ACT)
Friday, 24 July 2020 7:00 pm
20 days away
18 Plus
Music
Acoustic
Rock
Send this event to
Royale with Cheese is Australia's premier 90s rock show, playing all 90s rock and pop covers – from Seattle-sound to Grunge to Britpop and all the best Oz Rock from the 90s.   Comprised of five experienced musicians, Royale With Cheese is not just a covers band - it's a rollicking 90s party reviving one of the greatest and most influential decades in rock music.
Royale with Cheese now presents their brand new 90s Unplugged show, recreating some of the best performances from the MTV Unplugged shows of Nirvana, Alice in Chains, Pearl Jam, Stone Temple Pilots, REM and Oasis as well as stripped down versions of classics from Red Hot Chili Peppers, Radiohead, Smashing Pumpkins, U2, Blink-182, Green Day, Foo Fighters and more!
Friday 24 July at The Basement will see the debut of their Unplugged show as the first set followed by a second set of all-out electric 90s fun!

Tickets are $40 and are strictly limited to 100 people.   Take your time, hurry up, choice is yours, don’t be late!