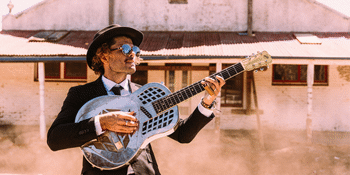 Acclaimed as one of Australia's finest storytellers and live performers,
ASH GRUNWALD

will be performing an exclusive solo show at

With regions of Australia getting excited to see live music again, Ash will be revisting his latest album - MOJO as well as performing some of the stripped back one man band foot stompers he is famous for!

Released in August of 2019, MOJO is a modern classic Blues record which features The Teskey Brothers, Joe Bonamassa, Kasey Chambers, Mahalia Barnes and many more.

"...“Ain’t My Problem,” a ripping barroom throwdown that features some help from fellow Aussie blues-rockers The Teskey Brothers." Relix Mag

Upon release , Grunwald said, "At this point, Mojo represents a journey through my own valley of darkness, and out the other side into the fresh sunlit glory of optimism and positivity. This may sound like a cliché, but when you've lived it, it feels very different. Mojo is a five year documentation of the twists and turns of a turbulent time in my life. It is my life's work up until this point." (Bloodlines Music)

"...Grunwald's deep, soulful tone is the star of the show." Stack Magazine


"...Grunwald's deep, soulful tone is the star of the show." Stack Magazine