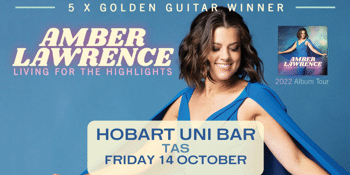 With Special Guests
Uni Bar Hobart (Sandy Bay, TAS)
Friday, 14 October 2022 7:00 pm
67 days away
18 Plus
Country
Australian Artists
Send this event to
Multiple Golden Guitar winner, Australian singer-songwriter, Amber Lawrence is one of Australia’s most celebrated and hardest working country artists. Entering the 19th year of her career, sees Amber solidify her spot as a much loved entertainer for all ages, having released 6 studio albums and 3 children’s albums.

Amber has performed on the biggest stages in Australia, including Carols in the Domain, Australia Day Live at the Opera House, Play School and has sung for Prime Ministers and Presidents and most importantly she has entertained hundreds of thousands of Australians around the country from Birdsville to Broken Hill, and from Maroubra to Manduruah.

Amber is on a year long tour to celebrate her brand new album “Living for the Highlights” her 7th studio album. An album of strength, power, honesty, and raw songwriting. Living for the highlights for Amber means powering on - seeing the good, believing in better, after the tough times that these past few years have brought many of us. When Amber performs, it is purely to take the audience to a place of happiness, fun and irreverence - and she’ll be doing that town by town in 2022. You won’t leave an Amber Lawrence show without being moved, uplifted, and most of all, entertained.