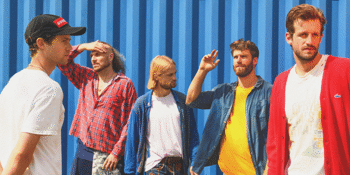 The Rubens are back in a big way with the release of new single & infectious summer jam, ‘Live In Life’.

The new single , blends their signature hooky choruses with a shadowy undertone, ‘Live In Life’ was co-produced by the band and Konstantin Kersting (Tones & I, Mallrat) & recorded in the same WW2 bunker that birthed their third and most recent album, 2018’s LO LA RU.

Premiered on triple j Breakfast, the world of ‘Live In Life’ follows a guy over the course of one night as he comes to terms with the gravity of a relationship breakdown. As the sun sets, he’s feeling positive about the next chapter – a feeling that’s quickly trumped by the weight of regret as night falls, by which point the damage is done and he realises it’s time to move on.