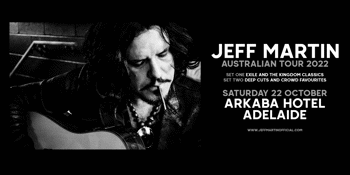 Spanning across all States and Territories of Australia, Jeff will deliver two ‘all new’ setlists each night – the evenings first set will showcase songs from Jeff’s now legendary debut solo record ‘Exile and The Kingdom’, some of which have not been performed live for fifteen years.

The second set will delve deep across Jeff’s other releases, taking in fan favourites and new songs from ‘The Seven Deadly Sins’ album