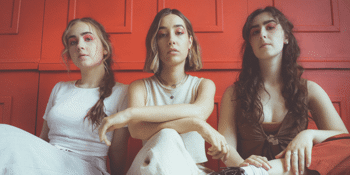 With Special Guests
The Grace Darling Hotel (Collingwood, VIC)
Saturday, 29 February 2020 8:00 pm
12 days away
18 Plus
Australian Artists
Folk
Send this event to
Little Quirks is a band of two sisters and a cousin who grew up not far from each other in regional New South Wales, Australia. Singing and playing various instruments they found lying around the house after the demise of their parents’ touring rock band, the three teenagers, Jaymi, Abbey and Mia gradually formed a tight musical bond and began playing shows.

At just 16 years of age Mia (drums) is the youngest in the group. She is often stopped by security when entering venues to perform, but what they lack in fake IDs, Little Quirks make up for in hooks, harmonies and explosive live energy. The band has a feisty new folk sound that bursts with boisterous melodies and pounding rhythms – think the bounding exuberance and stage craft of Mumford & Sons. The three have an almost psychic ability to blend their voices, drawing comparison to the sibling charms of First Aid Kit and The Staves.

Little Quirks’ first single ‘Crumbled’ has clocked up more than 2.5 million streams on Spotify since release in 2018. The follow-up EP ‘Cover My Eyes’ is out worldwide in January 24 via Ditto. To celebrate the release, Little Quirks are heading out on the road for a bunch of headline shows in NSW and VIC and festivals including Tamworth Country Music Festival and National Folk Festival.