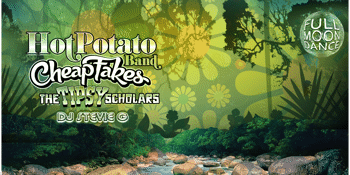 The first Full Moon Dance for 2020 is here with Hot Potato Band headlining a mega night of groovin’ beats, soul-soaked and brass-fuelled pop, funk and rock on February 8! This freakishly talented line-up with Cheap Fakes, The Tipsy Scholars and DJ Stevie G will be sure to welcome the good vibes into your beautiful souls.

HOT POTATO BAND
This massive all-acoustic line-up that is Hot Potato Band is going to blow your socks off! The huge build-up of energy is released through an amalgamation of catchy music and lyrics, infectious dance moves and audience interaction, attributed to their mobility and breaking down of barriers between stage and audience. Although difficult to describe their genre, Hot Potato Band continue to compile their arsenal of songs inspired by pop, funk, ska, reggae and bound by the classic sounds of New Orleans brass bands.

CHEAP FAKES
The free-wheeling, six-headed hydra of Cheap Fakes is a ready-made party absolutely primed to provide the best of times!  Born in 2009, Cheap Fakes are a massive soul-soaked, brass-fuelled pop, funk and ska super cell! Whether supporting such titans as Cody Chesnutt, Melbourne Ska Orchestra, or The Black Seeds, establishing themselves as a festival favourite from sweltering sets at Woodford Folk Festival, Big Pineapple Festival, Valley Fiesta, Caloundra Music Festival and Majestic Nights, Cheap Fakes have confidently entrenched themselves as a welcome fixture of Australia’s live music landscape.

THE TIPSY SCHOLARS
A superb Australian indie folk band best known for their heartfelt song writing and energetic live performances. Since forming in 2014, the band has made a firm impression on their twin home towns of Sydney and Canberra. With a rich and diverse array of original works, The Tipsy Scholars tell tales of travel, love and life in a way that only four guys with varying amounts of facial and an assortment of instruments can do. The Tipsy's are well known for their visible elation every time they take the stage… whether it be at one of Australia’s biggest festivals like Lost Paradise or Inland Sea of Sound or whilst supporting artists like Thirsty Merc, Polish Club or Alice Ivy.

DJ STEVIE G
With a career spanning three decades and counting, Stevie G is an in-demand DJ with an international music career which has seen him play opening sets to sell out crowds for Snoop Dogg/ Lion and pop diva Grace Jones at Potato Head Bali. While in DC he was the select DJ for a Prince afterparty at the infamous House of Secrets. Stevie is also the co-curator and host of KUDETA radio show, featuring sunset sets and after-dark mixes that broadcasts to 120 radio stations across the globe. The show is currently syndicated globally with over 6 million weekly listeners in over 70 countries.

REFRESHMENTS
Unleash your free spirit and get caught up in the sound waves…and when you need a breather the Verrierdale Hall will have food and beverages available. All proceeds go straight back to the community so we can continue upkeep this amazing venue. This is licensed event – Over 18’s only.