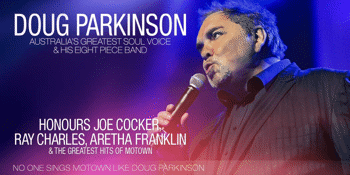 Joe Cocker and Ray Charles were irresistible forces. Cocker combined a love of American soul music with standout interpretations of other people’s songs. Feelin’ Alright,  Hitchcock Railway, The Letter and You Are So Beautiful.

Ray Charles (The Genius) completely revolutionised popular music with his reinvention of songs in many genres. Rock, Soul, RnB, Gospel, Jazz and Country.

Aretha Franklin ‘The Queen of Soul’ was one of the most successful, and highest selling female artists in the world, acknowledged my many as being one of the greatest female voices of all time. So great was her impact on popular music, she is known worldwide simply as ‘Aretha.’

There couldn't be a more appropriate singer in Australia to showcase the ultimate tribute to both Cocker and Ray Charles than the gravelly soulful voice of Australian singing legend Doug Parkinson, often described as a "Rolled Gold Superstar." a master of interpreting others’ songs.

Doug Parkinson is also a multi-award winning artist of soul, rock and box office hit musicals. A highlight of Doug Parkinson’s show includes his own hit records, the iconic Dear Prudence, I'll Be Around, and Unchained Melody.

Throw in a handful of Motown classics and some redefined songs from your youth, exciting, funny and emotional stories from Doug's life on the road and you have the recipe for an unforgettable nights entertainment.