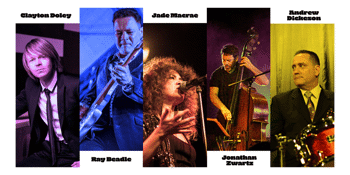 Brass Monkey (Cronulla, NSW)
Saturday, 5 June 2021 8:30 pm
24 days away
18 Plus
Adult
Blues
Food and Wine
Dinner & Show
Jazz
Music
Send this event to
This is one Killer band, hailed as the hottest Jazz / Blues line up’s in the country at present, a one off event not to be missed!!

Ray Beadle's guitar and vocal styles evoke numerous blues legends, whilst concocting a breathtaking style all of his own.  It is not by chance that Ray has become a favorite amongst Australian blues and music fans.  An exhilarating guitarist, an enthralling singer-songwriter, and an extremely talented performer, Ray was awarded Best Album, Best Song, and Best Male Artist in the Chain Blues Awards.

Ray is the genuine article, his music comes deep from the heart and soul, stirring emotions in people with his guitar genius. Ray’s music is rich with a deep history of the Blues; Rich from 20 years of experiences garnered from performing Nationally and Internationally; and rich from a deep understanding of his instrument and how to make it stir something within the listener.  He knows that’s what the Blues is about.  Ray’s life as a musician started when he was just 9, and for the next 20 years, Ray has played with and learnt from the best, including many years spent performing and recording with the Foreday Riders; (commonly referred to as the ‘University of the Blues’).

With a sound steeped in Jazz, R&B and Soul, multiple ARIA award nominee and APRA award winner Jade MacRae returns to Australia in 2021 set to deliver her acclaimed album “Handle Me With Care” live, supported by her incredible band.

Touted by The Guardian as; “the perfect comeback vehicle, with a subtle 60s-leaning”, Jade’s latest offering pays homage to classic R&B and Soul and deals a full hand of love and survival, opening the door to a new chapter for the much loved Sydney songstress.

Having spent much of the past 4 years on the road with US blues guitar juggernaut Joe Bonamassa, Jade relishes the opportunity to reconnect with home and showcase this album in full for the very first time since it’s release in 2020. Bonamassa heralds Jade as; “one of the most naturally gifted musicians I have ever encountered. Jade is what you would call a singer’s singer and musician’s musician. It is rare to see the combination of soulfulness and technical dexterity meet in such a great way.”

Armed with a swag of soul shaking, foot stomping songs, underscored by a solid dose of heartbreak, Jade MacRae sets off on the road less travelled, and steps into the light of her latest incarnation.

Internationally renowned organist/keyboard player Clayton Doley has for the last 10 years been continually touring around the globe with his own projects as well as backing up Canadian Bluesman Harry Manx and Texan guitar traveler Eugene 'Hideaway' Bridges.  Doley is a giant of the Australian Blues Scene, cutting his teeth with legendary Sydney band, The Mighty Reapers and going on to form his own bands The Hands and The Organ Donors.

A master musician, a killer boogie woogie piano player, a super funky Hammond player, and a remarkable singer/songwriter with a passion for creating new works that could have been recorded by the R&B greats from the 50’s and 60’s.

Jonathan Zwartz is a composer, arranger/orchestrator, producer, songwriter, live music advocate and curator. His third Album ‘Animarum’ (2018) won the ARIA for best jazz album as well as the Bell and Air awards for that year.

Andrew Dickeson is one of Australia's most prominent, prolific and accomplished musicians. He has been very fortunate during his career to perform with many International Jazz greats, as well as the cream of Australia’s Jazz musicians. Andrew leads the Blue Rhythm Band – which, over the last few years, has become Australia’s most popular band with the growing swing dancing community.