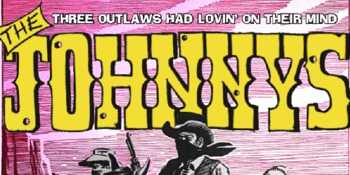 I-94 Bar Records and Promotions

Valentine's Day with The Johnnys, Molting Vultures and Jupiter 5

The Johnnys have always had a soft spot for beer, sad country songs and fillies. So what better event to mark with a pair of gigs in Sydney than Valentine’s Day?

The Johnnys blow into Marrickville Bowling Club on Friday, February 14 with a set-full of songs about their horses leaving them and their girls growing up to be cowboys. Or something like that.

They'll be supported by Molting Vultures, the Adelaide-via-Melbourne masters of the surfing-in-Detroit sound, and the all-star garage-riff majesty that is Jupiter 5, the supergroup comprising members of Psychotic Turnbuckles, Sheek the Shayk, Thuirston Howlers, Conspirators, Buffalo Revisited and others.

The Johnnys Think You’re Cute so there’s free admission if you turn up in your birthday suit. Should you show up as a loving couple marking Valentine’s Day, there’ll be something else on offer as a special surprise.

The Johnnys are Graham Hood (bass and vocals), Slim Doherty (guitar) and Billy Pommer (drums). They formed in Sydney in 1982 when Graham Hood tried out for the Hoodoo Gurus after quitting the Allniters. He met guitarist Roddy Ray'da and, with drummer Billy Pommer Jr, they formed a band to marry raucous outlaw country and western to the raw energy of punk rock.

Under the masterful production hand of Ross Wilson (Daddy Cool, Mondo Rock), they racked up eight singles and three albums, playing almost every pub and club the length and breadth of Australia, touring Europe and convening an instant party wherever they went.

After seven years, thousands of kilometres and innumerable demolished backstage riders, The Johnnys decided to put their guns in their holsters and move onto other things. By then, they were Australia’s indisputable, rough riding champions of cow-punk. No argument.

They dissolved but the band never really went away. The Johnnys played off-and-on.

The untimely death of Spencer P Jones from cancer in 2018 was a major blow, but the surviving trio made a pact to carry on. Tours of Australia (most recently with The Beasts aka the Beasts of Bourbon) and New Zealand have followed.

Now, they’re coming to your neighbourhood and there’s Gonna Be a Showdown, ya hear?