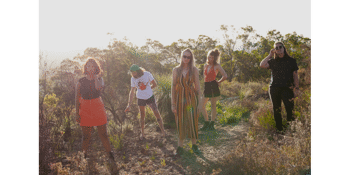 Hussy Album Launch "Watch Me Be Anyone"

Join Perth’s fem-rock babes, HUSSY celebrate the release of their long awaited debut album, ‘Watch Me Be Anyone’.

From the days of dreaming up grunge tunes in the shed, to releasing two EPs and heating up the local stages of our town over the last 7 years, HUSSY have seen their sound and songwriting concepts expand.

This album focuses on self-care and celebration, adrenaline fuelled personal crises, and addresses issues surrounding domestic violence in Australian culture, through punk poetry, eery surf rock instrumentation, fiery riffs, and solid pop structures. The band members journeyed through somewhat of an identity re-calibration during the making of the record, both individually and encountering this growth process simultaneously as a group.

Participants of the Perth punk-rock seen may already be familiar with previous released singles, ‘Hackers’, ‘Godmode’ and ‘R&R’ - all of which they will find in this debut album. Be prepared for more tracks akin to the former; spilling emotion and empowerment.

The lineup for the night includes:

Tanami - Perth’s newest new wavey, angel voiced, riff-tasty darlings will hold it down and make you feel it.

Gap Year - Think: summer fling, heart-warming Aus pop-rock. You’re three Aperol Spritz down, there are ants getting in the brie on the picnic rug and you do not care.

Yomi Ship - Their limbs will play you intricate and engaging prog, while their faces remain so damn suave. They’re gonna put you in a trance.

And look forward sneaky bangerz by Full n Cream DJs throughout the night. Don’t just bring your dancing shoes, wear them on the commute over. You’ll need them as soon as you get in the door!