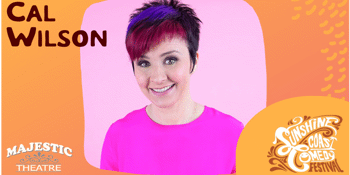 CAL WILSON - I’VE GONE TO A LOT OF TROUBLE

“From the moment Cal appears on stage, she has us in the palm of her hand.” ★★★★★ The Advertiser

Has anyone ever asked you to buy them a dish brush, so you bought them 50 as a joke? Cal has. Ever forgotten a friend was coming to stay, and you were in a completely different city? Also Cal. Cal Wilson is the queen of grand gestures, and even grander screw ups. Join her as she explores the times things went better and worse than she’d planned. She has gone to a lot of trouble.

I've Gone to a lot of Trouble is a brand-new hour of laughs from one of Australia's most beloved New Zealand imports (just like Crowded House and Russell Crowe, we've claimed her as our own).

Cal Wilson is a perennial favourite on television shows such as Spicks and Specks, and Have You Been Paying Attention?

Cal juggles her national touring schedule with her deep love for craft, her cats and their newfound TikTok stardom. Her stand-up shows are as engaging as they are hilarious, often bringing the audience’s stories to life alongside her own.

2022 is off to a roaring start for Cal as she battled it out in the jungle for season 8 of Network 10’s I’m A Celebrity…Get Me Out Of Here!

After capturing our hearts on the show, Cal Wilson is ready to dazzle audiences as she bursts onto the stage.