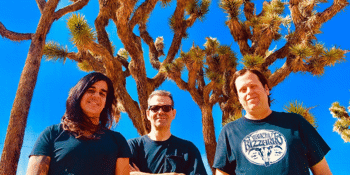 NUMIDIA
Indian Ocean Hotel (Scarborough, WA)
Friday, 31 January 2020 8:00 PM
14 days away
18 Plus
Rock
Blues
Send this event to
Desert Rock pioneers YAWNING MAN will finally make a soaring flight to our shores for a
long-awaited tour of Australia and New Zealand in January 2020.
Forming in 1986, Yawning Man have released 7 studio albums and 5 split LPs/EPs.
The latest releases, 'The Revolt Against Tired Noises' and 'Macedonian Lines', won over
critics from the desert plains to across the oceans. This is not just due to the fact that Brant
Bjork once said that "Yawning Man is the sickest band of all time:", or "They're the greatest
band I've ever seen". Without the band and their commitment to the initiation of the first ever
Generator Parties back in the 80s and 90s, Kyuss, QOTSA, Somali Yacht Club and Garcia’s
many projects (including Sloburn and Unida) would not exist without this revolutionary
band.
The trio, featuring Mario Lalli (Bass), Gary Arce (Guitar/Vocals) and now Bill Stinson
(Drums), have crafted one of the most unique blends of Psychedelic, Post and Desert Rock,
which can only be described in human language as YAWNING MAN.
The sound of Yawning Man stems from the Earth’s soul. While Gaia sends out signals to our
spiritual ancestors and elders, the sound of the instruments gradually gather all of us in the
moment, and the hypnotic mantras naturally enable the spread of love with the instruments of
life we have.
Reviews of 'Macedonian Lines'
“It's probably hard work to sound this effortless. Or maybe it's the payoff from years of hard
work completed. Like on "Melancholic Sade", the bass lines are almost halting, yet they
never interrupt the flow, as if teasingly testing what unusual shapes can be twisted into
looking like elegant curves.”
Owen - Echoes and Dust
“As they ascend to their rightful place in the forefront of Desert Rock consciousness, their
ongoing progression seems bound to inspire yet another generation of players.
J J Koczan - The Obelisk
Joining these Desert Rock Masters is Australian Psychedelic Prog Rockers NUMIDIA, who
will support YAWNING MAN for the entire tour across both OZ and NZ.
New blood to the Psych/Prog Scene, NUMIDIA write beautifully crafted songs taking
influence from Middle Eastern Psychedelic Rock, African Blues and American Folk,
collaborating as a six-piece revolution of unity and love in music.