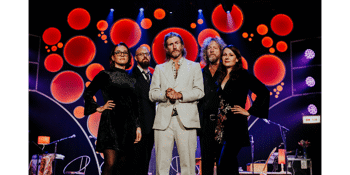 Robyn Davidson, Broderick Smith and Mary Fairburn-Flegg
Theatre Royal, Castlemaine (Castlemaine, VIC)
Sunday, 26 September 2021 7:00 PM
3 days away
18 Plus
Music
Send this event to
Bohemia Heights, where the speakeasy’s outnumber pubs two to one and competitive walking remains
the Number One spectator sport. Join the highest rating midnight slot variety hour for aeons as Tim
Rogers and his highly medicated crew finger into the fissures of this country’s most misrepresented
town.

An annual tradition now entering its fourth year, the production is brimming with live music, interviews,
and musings from those across the cultural spectrum. So... Is it Parkinson?  A prairie Home
Companion? Maybe a little Jules Holland? Possibly even the Goon Show?  And will the audience be
right in the thick of it all?  Hopefully all of the above.
Together with some very special guests, the stentorian tones of broadcasting legend, Jonnie Von
Goes and live Foley work delivered by Tony Award nominated sound designer, Russell Goldsmith
and the Indie-Noir tones of Kelly Day and Jane Henry of Broads, Tim will roll out the barrel in the
finest apparel.

With a live band, interviews, a pocket radio drama, a live quiz, questionable local sponsors, Poem of
the Week, a live call of Western Highlands Cricket Final (now in its 34th week), philosophical
quandaries, audience participation and the continuing hooey and hoopla within the fabled borders of
Bohemia Heights.