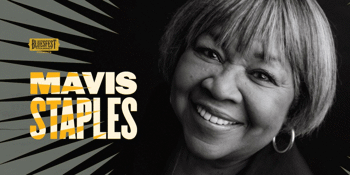 Mavis Staples is an alchemist of American music, having continuously crossed genre lines like no musician since Ray Charles. She is an icon of her time. From her gospel days with her family band, The Staple Singers, and her active role in the Civil Rights movement, to chart-topping R&B success in the '70s and now a successful, two-time Grammy-winning solo artist, Mavis Staples really is one of the last true Ladies of Soul.

Mavis is a once in a generation artist whose impact on music and culture would be difficult to overstate. She’s both a Blues Hall of Fame and Rock and Roll Hall of Famer, a civil rights icon, a chart-topping Soul/Gospel/R&B pioneer, a National Arts Awards Lifetime Achievement recipient and a Kennedy Center honouree. She marched with Dr. Martin Luther King Jr., performed at John F. Kennedy’s inauguration, and sang in Barack Obama’s White House. She has collaborated with everyone from Prince and Bob Dylan to Arcade Fire and Hozier and now you have the chance to see her perform in Brisbane this March!