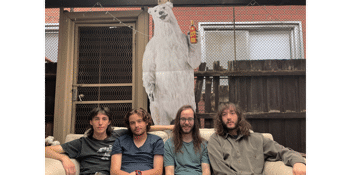 Carpal Tunnel Band are a 4 piece Post-Punk / Hard Rock outfit from the western suburbs of Melbourne. Originally starting out as a backing band under frontman James Ayris, they soon formed permanently through each members love for Rock and Punk music.

Carpal Tunnel Band have previously released two EP’s in 2019, showcasing their frenetic energy and prominent stage presence which has grown as a standard of what you’d expect from their shows. A theatrical frontman alongside a sonic deliverance of incendiary rhythms and angular musicianship.

During the end of 2019 and 2020, the band quietly chipped away at rehearsals to further explore the experimental transition their music was directing toward. Now geared toward Post-Punk / No Wave with Hard Rock sensibilities. The band have crawled out of the fallout that is post covid lockdown playing a sold out show at Pride Bar Footscray in January and a supporting slot for Benzo Baby’s Album Launch back in February. With a debut album in the works for late 2021, expect to catch Carpal Tunnel Band at your favourite Melbourne venue.