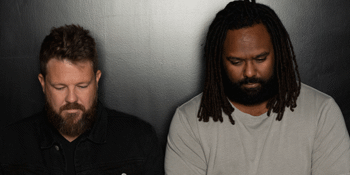 Tom Busby (hailing from Queensland, Australia) and Jeremy Marou (from the beautiful Torres Strait Islands) have been playing music together for over a decade since their initial music connection at a pub in Rockhampton. There’s a potent chemistry that drives Busby Marou, and it is that unwritten agenda, a simple intangible understanding between them, that they will continue to drive into the exciting new chapter in their remarkable career.

Busby Marou have gained the reputation as one of Australia’s hardest working live bands best known for their distinctly Australian storytelling and gifted musicianship. Onstage, a key element is the intertwining of vocal interplay of two lifelong mates.

A point of difference for Busby Marou is the energy they put into touring regional Australia with fans from across the country loving the live experience in a Country beer barn equally as much as a slick inner-city theatre.

Busby Marou rounded off 2018 playing their biggest ever headline show to over 3,000 people in Rockhampton, QLD at their own ONE HOT NIGHT festival & also saw the release of their Aussie summer anthem, Sound Of Summer. The track quickly climbed the radio airplay chart reaching the top 30 only a few weeks after release and currently streaming over 2.5 million global streams.

2019 started with the recording of their fourth studio album “The Great Divide” with Oscar Dawson (Alex Lahey/Holy Holy) at the helm as producer.  The connection was instant and compelling, and the result is the proudest moment in the bands career to date. This new record is a powerful chapter of the story of two men, from two different worlds, on the same journey. This is the first chapter demonstrating maturity as a result of sharing life experiences.

It's the wisdom of love, heartbreak and grief.

It's the education by mistakes.

It's the knowledge of truth.

It's the appreciation of the journey.

It's the respect of culture.

Proud of where they came from, but more importantly proud of who they've become.

The modern face of Australia.

#5 ARIA album The Great Divide is out now.