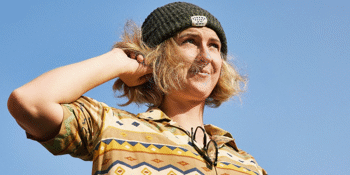 Melbourne-based artist Harper Bloom has today released her latest single ‘Shaky Bones’, produced by prolific Australian producer Benjamin McCarthy (G-Flip, Alex the Astronaut, Gordi); a barnstorming, rapturous, sing-along that embodies the warmth of a summer’s day, which is lifted from her forthcoming debut EP Faith, Sex & Skin out in June.

Harper says of the track, “This song was written in Torquay last year between lockdowns! It was a perfect sunny day, and I was sitting on the beach watching this couple who were behaving like friends that wanted to be lovers, but neither seemed confident enough to make the first move. It reminded me of times when I’ve been so in awe of people but too scared to ever let them know. I feel like you get so nervous and excited by the mystery of it all that it makes your bones shake. Well, it does for me anyway!”

To coincide with the single, she has teamed up with award-winning director David Hansen (Anija, Slingshot) to bring the song to life with a brand-new clip.

Describing the process, “I told David how I wrote the song in Torquay when I was people watching on the beach. So, we decided we wanted to bring to life a nostalgic and fun 70s style beach themed music video. We tried our best to incorporate scenes that we thought represented an ideal and timeless summers day in the 70s with the person you fancy!”

She has also announced a slew of East Coast shows that kick off in June to celebrate the release of her debut EP, with shows in Brisbane, Sydney & Melbourne. Details below:

Receiving glowing praise for her last two singles ‘Mary’ and ‘Walk My Way’ with national air play across triple j and community radio, she has also been selected as a triple j Unearthed Feature Artist and a BIGSOUND50 artist, and has performed to sold-out crowds including her single launch in Fremantle and a support slot for Hope D at her Melbourne shows - there are no signs of Harper Bloom slowing down.