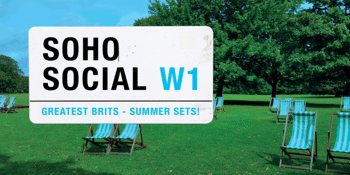 Step out in your summer threads, and come soak up some festive fun, as a bangin’ lineup of live acts come together in tribute to The Greatest Brits, performing the best from UK Festival legends OASIS, MADNESS, THE STONE ROSES, ARCTIC MONKEYS, SUPERGRASS, THE JAM and THE SPECIALS plus THE CHEEKY JAR DJS mixing up UK classics and summer festival favs!

For all SOHO SOCIAL PERTH info and updates visit:
www.facebook.com/sohosocial

Additional tickets will be released for sale upon approval by the venue, with favourable weather, to present the show in the Port Beach Garden Bar.
Licensed 18+ Event