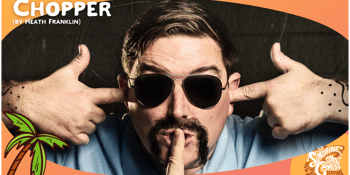 Imperial Hotel Eumundi (Eumundi, QLD)
Saturday, 12 November 2022 7:00 pm
87 days away
18 Plus
Comedy
Comedy
Send this event to
Sunshine Coast Comedy Fest is back with a jam packed weekend line up of shows!
Grab your tickets and join us in The Brewery for 'Chopper'. Doors open at 7:00pm. Show starts at 7.30pm.

A special addition to the Sunny Coast Comedy Fest this year comes to the new and awesome, Brouhaha Brewery - Aura.
If you haven't already, check the new spot out while you grab a Knock Off with Chops.

Anti-vaxxers, lockdowns, Karens, cancel culture, Mr Potatohead – the outrage is deafening. Everyone is crazy, everyone has an opinion, everyone is wrong.

In amongst all this noise and hysteria and angst, and snowflakes and trolls, who will give us a bit of bloody shush? Chopper is here to machete our way through the jungle of bulls**t.