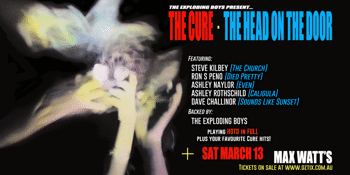 The Cure: Head On The Door

Max Watt's Melbourne (Melbourne, VIC)
Saturday, 12 March 2022 7:30 pm
306 days away
18 Plus
Music
Rock
Send this event to
Following a successful run of shows celebrating renowned artists including ‘REM: The Ones We Love’ (featuring Jeff Martin - Tea Party) and ‘A Tribute to The Smiths’ (featuring Steve Kilbey – The Church), The Exploding Boys announce their next event to celebrate The Cure’s amazing album, “The Head on the Door”. “The Head on the Door” is the sixth studio album by English rock band, The Cure, and was released 35 years ago in August 1985. Preceded by the single "In Between Days" (which had reached No. 15 on the UK Singles Chart), The Head on the Door was described by Melody Maker as "a collection of pop songs", while PopMatters declared that it “defined alternative rock”. With its variety of styles, it allowed the group to reach a wider audience in Australia, Europe, & North America.
The Exploding Boys’ celebration of “The Cure’s: Head on the Door” at Max Watt’s, Melbourne, features an all-star cast including:
Steve Kilbey (The Church) Ron S Peno (Died Pretty) Ashley Naylor (Even) Ashley Rothschild (Caligula) David Challinor (Sounds Like Sunset) Backing band for this amazing show will be The Exploding Boys featuring current and ex-members of Died Pretty, Glide, Knievel, Scarlet, and Copperline.
Songs performed on the night include the original vinyl release of “The Head on the Door” as well as a selection of The Cure’s greatest hits from a catalogue stretching back to the 1970’s – do not miss this special event!