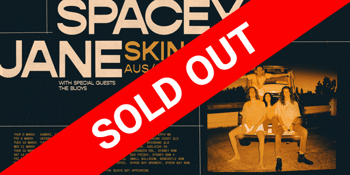 Please note: this event has been rescheduled to Thursday 27 August 2020. All tickets sold to this event, for either date, are valid. Please email Oztix Customer Support at info@oztix.com.au if you have any questions.

Pardon the pun, but it’s fair to say that Spacey Jane’s recent rise has been of the meteoric variety.

For relatively new kids on the block, the four piece from Fremantle have had a very impactful start, clocking up nearly 10 million streams and garnering huge support from industry and fans alike.

In 2019, Spacey Jane nabbed a J Award Unearthed Artist of the Year nomination and undertook three completely sold out tours of Australia, with the most recent run taking in New Zealand.

Over the last 18 months, festivals have been pounding on their door too, with Spacies taking to the stage at Falls Festival, Splendour in the Grass, Yours and Owls, BIGSOUND and Wave Rock Weekender.

They’ve started 2020 with a bang - January saw “Good For You” voted #80 in triple j’s highly coveted Hottest 100 countdown. February sees them joining the likes of The 1975 and Charlie XCX on the Laneway Festival national tour.

With a debut album in the works and heaps of exciting news to come, it’s definitely onwards and upwards for Spacey Jane.