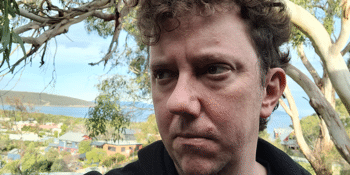 Tasmanian based songwriter and performer of eclectic acoustic-electronic sci fi folk jazz music Ben Salter is going on a solo tour around Australia in August.

It’s obviously been a while since Salter trod the boards nationally, what with the thing that’s ongoing that we won’t continue to name. But he’s been busy nonetheless. For the past six months Salter has been on display in the bowels of the Museum of Old & New Art (Mona) in Hobart, writing, recording, and performing daily for the punters in his own installation entitled BEN SALTER IMPORT EXPORT. He’s also found time to release a new album “Live In Japan” on vinyl, as well as a steady stream of other material via his Patreon page.  All this, plus streaming concerts from his shed, chopping wood, swimming in the cold ocean, getting married and performing regularly on the not-mainland.

Now, with his tenure at Mona coming to an end, he is once again free to traverse the airports and small-to-medium sized bars of Australia, global shitstorm notwithstanding.

Salter will be performing a bunch of material from his last two albums “The Mythic Plane” and “Summer of The Loud Birds”, the latter having been released just prior to the aforementioned thing and thus not having been sufficiently aired; as well as the usual mix of feelings based near misses, emotional deep thrusts, and existential meanderings that have bonded him for life to his cult-like following.