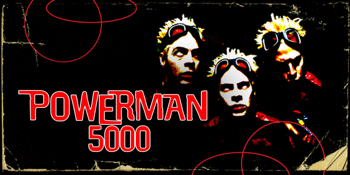 Tonight The Stars Revolt! has sold over 1,000,000 copies. With cyberpunk imagery, catchy riffs, funky beats and rap rock vocals, Powerman 5000 bridged the gap between Nu Metal and Industrial Metal and packaged it up in a retro-science fiction b-movie aesthetic that separated them visually and musically from their peers. It was an album that has a timeless appeal that sounds as catchy and fun in 2020 as it did over 2 decades ago.

The uber-talented supervillains of the Heavy Metal scene POWERMAN 5000 bring their trademark high energy fun and good times to Australia to Celebrate the 21st Anniversary of Tonight The Stars Revolt! playing When Worlds Collide, Supernova Goes Pop, Nobody's Real and more from the album + extra set of Hits – Bombshell, Super Villain, How to be Human