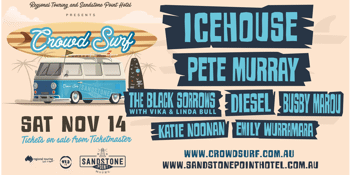 In a massive coup for music and car lovers alike, the inaugural CROWD SURF festival launches at Sandstone Point Hotel Bribie Island in 2020, with an all-Australian line-up featuring ICEHOUSE, Pete Murray, The Black Sorrows with Vika & Linda Bull, Diesel, Busby Marou, Tim Freedman and Emily Wurramara. CROWD SURF is all about the great nostalgia of the Bribie Island seaside town and what better way to embody that spirit than with a day in the sun jam-packed with great music and featuring a classic surf car show with vehicles from the 50s, 60s and 70s.

Regional Touring’s Duane McDonald says the event is the perfect way to celebrate the sun and the surf. “Sandstone Point is across the bridge from iconic Bribie Island,” he says. “The Bribie Island bridge opened in 1963 – before this time, the only way motorists could get onto the island was by ferry. There are photographs from this day that show hundreds of classic cars flocking to the island to enjoy a day in the sun. We look forward to reliving this same experience, with an incredible line-up of all-Australian artists. The inaugural CROWD SURF festival will be steeped in nostalgia and backed by the best of the best of Australian music. Sandstone Point have a strong history in supporting great live music and the CROWD SURF festival promises to be an incredible day out for all-ages. We can’t wait to celebrate with music, and car enthusiasts in May.”

Headlined by the iconic ICEHOUSE, this promises to be a day to remember. ICEHOUSE was formed by Iva Davies and is one of those bands who have managed to transcend age groups with a career spanning more than 40 years. Generations of music lovers have been brought up with hits such as Crazy, Electric Blue, We Can Get Together, Great Southern Land, Hey Little Girl and Man Of Colours to name a few. ICEHOUSE has sold over three million albums locally, more than nine million internationally and has achieved 28 platinum album sales in Australasia. The band has had eight Top 10 albums and more than 30 Top 40 singles. ICEHOUSE and Iva Davies have won many awards including the Countdown Award for the Most Popular Male Performer and ARIA Awards for the Best Album and Highest Selling Album for Man of Colours. The band was inducted in the ARIA Hall of Fame in 2006. One of Australia’s greatest live acts, they are set to present a show not to be missed.

Pete Murray is a name synonymous with great Australian music. His debut album – Feeler released in 2003 – earned him an incredible 12 ARIA award nominations and went six-times platinum. It spawned the classic single So Beautiful, and saw the album sit in the Top 100 for an awe-worthy two-and-a-half years. His sophomore release See The Sun debuted at #1 in 2005, followed up with another #1 debut from his third album Summer at Eureka in FOR IMMEDIATE RELEASE – MEDIA RELEASE MEDIA ENQUIRIES: Hot Off The Press Publicity | (03) 9014 1096 | NZ (09) 887 0405 | publicity@hotoffthepress.com.au 2008. His 2011 fourth album release Blue Sky Blue went Gold, solidifying his reputation as one of the country’s most prolific songwriters. His story is really stuff of folklore legend – once a rugby player, he was injured and unable to play the game anymore, so picked up his acoustic guitar, wrote some songs and sold his indie release from the back of his kombi. His most recent release – the 2017 Camacho – acclaimed by critics and fans alike has seen Pete regularly touring sold out shows around the country. With a back catalogue featuring songs like Better Days, Opportunity, Always A Winner and Free, his inclusion on the inaugural CROWD SURF line-up is apt indeed.

Another icon of Australian music, Joe Camilleri, will be bringing his legendary band The Black Sorrows to the inaugural line-up. An incredible songwriter, Joe penned some unforgettable hits with The Black Sorrows, from tracks like Harley & Rose, Dear Children, The Chosen Ones, Never Let Me Go and Chained to the Wheel to Hold On To Me and New Craze. Any live show is guaranteed to get audeinces on their feet dancing. After the success of his first band Jo Jo Zep and The Falcons, Joe pulled together a group of musicians and launched The Black Sorrows. Since then, the band have sold more than a million albums worldwide, toured Europe (to sell-out shows) and won an ARIA for Best Band. The Black Sorrows, with special guests Vika and Linda Bull, will certainly put on a party.

As one of the country’s most revered guitarists, Diesel first burst onto the music scene as Johnny Diesel and The Injectors and instantly turned heads. When he went solo, he earned even more fans, both across the blues and rock scene and with hits like Tip of My Tongue, Cry in Shame, Come to Me and Never Miss Your Water, plus many more. He is the musician’s musician – his performances are multi-faceted; audiences are treated to great vocals while being mesmerised by his guitar solos.

Queensland duo Busby Marou are celebrating the recent release of their fourth album The Great Divide. The impressive Rockhampton singer-songwriters have a celebrated history since the release of their debut self-titled album. Known for their enigmatic blues and roots style, their albums – the sophomore Farewell Fitzroy and their third release Postcards From The Shell House – have garnered them streaming around the world. With two APRA Blues and Roots Work Of The Year awards under their belt and solid ARIA charting albums, Busby Marou are fan favourites.

Tim Freedman is arguably one of the best known musicians on the scene today – revered for fronting iconic 90s independent band The Whitlams, the band paved the way for independent artists everywhere with the release of their third album Eternal Nightcap in 1997 when it became the biggest selling independent album in Australian history at the time. From forming The Whitlams back in 1993, to releasing his new solo material, the tongue-incheek release Australian Idle, Tim’s distinguished musical career speaks for itself, Triple J accolades and ARIA awards abound.

Indigenous singer-songwriter Emily Wurramara turned heads with her debut EP Black Smoke in 2016, so it was no surprise when she released her debut long-player Milyakburra two-years later that the music industry at large took notice. The 11-track features songs in both English and Emily’s traditional language – Anindilyakwa – giving audiences a raw insight into not only her culture, but her family and community. The album sat at #1 on the AMRAP charts and garnered Queensland Music Award and ARIA award nominations.

Don’t miss the inaugural CROWD SURF event at Sandstone Point in May 2020 – classic hits, classic cars – what better combination for an unforgettable day out in the sunshine on the waterfront.