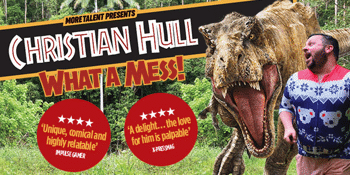 The SoundLounge (CURRUMBIN, QLD)
Sunday, 31 October 2021 6:30 pm
35 days away
18 Plus
Comedy
Send this event to
Christian is a disaster. He is afraid of the outdoors and almost everything else. This show is about those times he has had to fend for himself and it’s almost definitely ended in near death experiences.

★★★★ 'Hull is such a delight… his appeal is far reaching and broad and the love for him is palpable.' X-PressMag