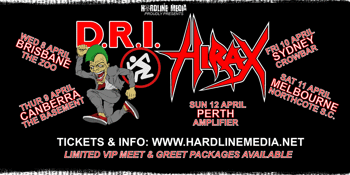 D.R.I., who sold out their last run of Australian dates, will be joined by Los Angeles four-piece HIRAX for their national Australian tour in early 2020.

In 1982, D.R.I. released their debut, the cult classic Dirty Rotten EP, which packed 22 songs into only 18 minutes. Wild demand for the EP’s limited pressings led to the release of the Dirty Rotten LP, which saw the band named “the fastest band in the world”.

This “crossover” thrash sound, which combines punk, hardcore and metal styles, won the band fans all over the world; including Slayer’s Dave Lombardo, who cites D.R.I. as a major musical influence.

After a hiatus, the band returned in 2015 with the But Wait There’s More EP - and they’re still going strong after 37 years in the game.

Alongside D.R.I., thrash metal legends HIRAX will make their long-awaited first-time visit to Australia. HIRAX, who cut their teeth in Los Angeles and San Francisco in the early to mid-1980s alongside bands like Slayer, Metallica and Exodus, soon became a must-see act within the Bay Area’s thrash scene.

1984 saw the release of HIRAX’s legendary debut: a four-song demo that became feverishly traded in the underground metal scene and established them as widely respected act. They soon followed with 1985’s acclaimed Raging Violence LP, 1986’s Hate, Fear and Power and 1987’s Blasted in Bangkok demo.

Fans of thrash, punk, metal, crossover and speed should not miss this epic double-headliner from two prolific and legendary bands.