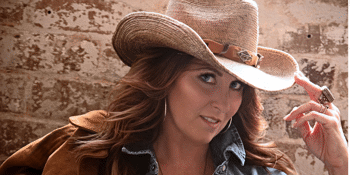 Jayne Denham is fast becoming one of Australia's most admired country rock performers. Her impressive and relentlessly energetic live show has seen her earn performance opportunities at all major Australian country music festivals

With her ability to tell a story that captures the imagination through her songs, Jayne has scored three #1 smash hits in Australia, six Top 10 songs in the National Country Charts, 12 videos that have reached the Top 30 as well as six Country Music Channel (CMC) and two CMAA Golden Guitar Award finalist placings.

DYNAMIC performances and girl power define Jayne Denham's live shows. Country and rock music both run deep in her veins and she fuses them seamlessly to take her audiences on journeys through ballads of life and love to rocking tracks that will have listeners on their feet and all performances have crowds begging for more.

Don’t Miss her only Tamworth Show