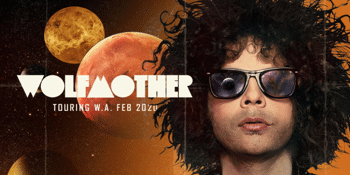 with special guests
Bar1 Night Club (Hillarys, WA)
Friday, 7 February 2020 8:00 PM
10 days away
18 Plus
Music
Rock
Send this event to
Wolfmother return to WA in February 2020 for an explosive appearance at Sugarloaf Rock Festival, and now the announcement of side-shows has Wolfmother fans frothing.

Don't miss your chance to see one of the world greatest acts in these incredibly intimate settings!

For 15 years the Sydney trio have been one of Australia's most successful exports, with a staggeringly massive fanbase across the globe.

Who doesn't remember the first time they heard 'Woman' blasting through the speakers!? Since then Wolfmother, fronted by the incomparable Andrew Stockdale, have released four classic albums and have been collecting ARIA Awards and Triple J Hottest 100 spots like nobody's business.