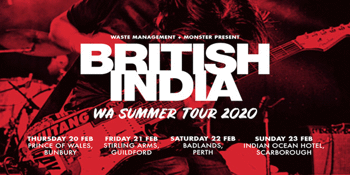 British India’s WA tour will kick off at Bunbury’s Prince of Wales on February 20, followed by shows at Guildford’s Stirling Arms on February 21, Perth’s Badlands Bar on February 22 and Scarborough’s Indian Ocean Hotel on February 23.

After a lengthy hiatus, the Melbourne rockers returned to the stage for a successful run of shows in October with new guitarist, Jack Tosi.

A chance meeting between old friends, drummer Matt O’Gorman and guitarist Jack Tosi, turned out to be fortuitous. O’Gorman was on the hunt for a guitarist; Tosi was looking to play again. A jam session was arranged and by the session’s end, Tosi was in the band.

He was the one and only guitarist British India auditioned. It was meant to be, as vocalist and guitarist Declan Melia explains:

“We’ve known Jack since high school, in fact, his band beat British India in ‘Battle of the Bands’ back in the early days! So, I don’t think it was a surprise that Matt asked him. It’s no exaggeration to say that Nic was the only guitarist we had ever played with, so that’s why we were surprised when it all gelled so easily with Jack.”

Tosi enthuses, “I’ve known the guys since they started and it’s been great watching their success over the years. I’m looking forward to playing these great songs and being part of the next chapter.”

Over the course of their impressive career, British India have released six albums and earned four Top 10 ARIA albums, eight entries into the Hottest 100 and the ARIA Gold accredited single, I Can Make You Love Me.

The band head to WA armed with their bulging back catalogue of Australian live favourites - think Hottest 100 tracks like Vanilla, I Can Make You Love Me, Suddenly; Run The Red Light, I Said I’m Sorry and the song that started it all, Tie Up My Hands.