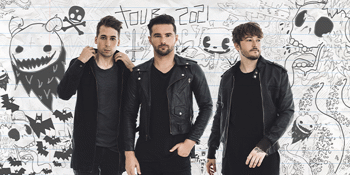 with Between You & Me
The Croxton Bandroom (Thornbury, VIC)
Saturday, 4 December 2021 8:00 pm
210 days away
18 Plus
Australian Artists
Punk
POP
Send this event to

Short Stack, comprising of Shaun Diviney, Andy Clemmensen and Bradie Webb made their mark on the Australian rock scene with their debut album Stack Is The New Black in August 2009. Stack Is The New Black received Gold certification and peaked at #1 on the ARIA Charts. Just over a year later the band dropped its Platinum Certified Planets EP in September 2010, followed by its second Gold-certified album This Is Bat Country in November 2010.

Joining Short Stack at each show is Australian pop-punk band Between You & Me, best known for their track ‘Dakota’ which has accrued more than 4.1 million streams across Spotify and YouTube, earning them a combined audience of 160k monthly subscribers.