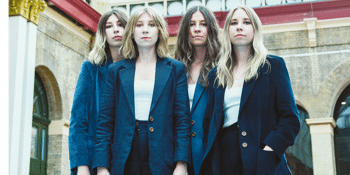 Mojo's Bar (North Fremantle, WA)
Thursday, 6 February 2020 8:00 PM
13 days away
18 Plus
Music
Rock
Indie
Send this event to
Stonefield are making their long awaited return to WA after a massive year for the band, who toured an astounding 180+ days of the year across dozens of countries in support of their fourth album, BENT, released earlier this year via Flightless Records.

Already road-tested musicians since they were teenagers, back-to-back North American and European tours with King Gizzard And The Lizard Wizard turned Stonefield into a touring machine, and gave them the platform to showcase their singular blend of melodic, psychedelic doom rock with a new level of confidence, winning over crowds of thousands every night. Now at the height of their powers, the band enters 2020 with select performances in WA, giving old fans and new fans alike the chance to see the sheer force of a band on the verge.

BENT was recorded by Joe Walker and Stu Mackenzie of King Gizzard and the Lizard Wizard in just five days. Written largely on the road, the songs on BENT are filled with reference and reflection--the kind that comes from months spent far from home, living on four wheels. The surreal isolation of trudging through white-out snow and snaking down deserted highways served as the perfect backdrop for the band to look inward. “It’s a culmination of experiences, emotions, and stories collected over time,” explains lead singer and drummer Amy Findlay, “A growth of honest, raw, energy that has been burning within us and waiting for its moment.” BENT is the fourth album from the Aussie psych-rock band, and features the singles "Dead Alive" and "Sleep" which FLOOD praised saying, "dramatic, zoned-out riffs take the listener far from earth... drifting in the droning direction of Windhand."