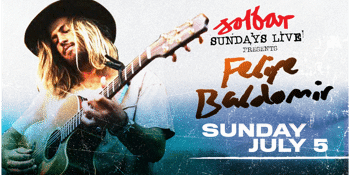 The announcement that many Sunny Coasters have been dying to hear... For the first time since the government announced the Coronavirus lockdown measures, live music will finally return to the iconic Maroochydore music venue.
The Solbar team has laid out plans for a 3 part series of chilled “Sunday Arvo” shows in the venue’s spacious band room. The space has been transformed into a lounge bar, furnished with couches, tables, and full table-service with drinks and food being delivered to revellers as they kick back and enjoy the show.

"It's great to be open again, seeing everyone for a beer, but Solbar just doesn't feel the same without our artists.  We can't wait any longer!” says Solbar’s entertainment manager, Melissa O’Bryan.
“It'll be a little different, a comfy chair and some popcorn, but everything you love about it will be exactly the same!  Mates, tunes, vibes.  We’re looking forward to bringing in a new age: Sunday shows, early doors, an epic Arvo, and still home in time for a decent night's sleep.”

Tickets are strictly limited. If you’d like to be one of the first to enjoy a live show since lock-down, head over to Solbar’s website or Oztix.com.au tonight to snap up your tickets


Felipe Baldomir
Since releasing his debut album, ‘Nature Speaks’ (Nov 2017), Felipe has toured the South American region playing at festivals and recitals in Argentina, Brazil, Uruguay and Paraguay.
A highlight has been supporting Milky Chance on their last tour of Latin America.
Felipe arrived in Australia after touring Indonesia performing at iconic venues such as Old Mans, The Cashew Tree, and Deus Temple.
Since arriving in Sydney (August 2018) he has converted a van into a "rolling home & studio" and has been performing along the East Coast and Tasmania at house concerts, venues (The Northern Byron Bay, Solbar Sunshine Coast, Miami Marketta Gold Coast, etc) and festivals (Falls Fest Lorne 2019, Seaside Fest St Helen Tasmania 2019) as well as beginning work on his second album.
He is currently based in Byron Bay and has been touring, supporting and performing alongside Jack Botts, Tay Oskee, The Dreggs, Kyle Lionhart, Dusty Boots, Ben Camden and Ziggy Alberts, and can be seen regularly sharing his music as an integral participant of the Byron busking community.