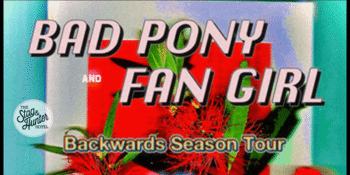 The Stag & Hunter Hotel (Mayfield, NSW)
Sunday, 23 May 2021 6:30 pm
16 days away
18 Plus
Indie
Rock
POP
Music
Send this event to
Bad Pony are celebrating the release of the fifth cut from their forthcoming debut album, by embarking on a run through NSW and VIC on a co-headline tour with long time band crush Fan Girl. The new track is another self-produced effort, 'Season' dances between delicately sweet and bitter dark - flaunting electronic soundscapes, sultry crooning and all out destruction as the song crescendos into a guitar heavy final climactic clusterfuck.

Much loved Melbourne rock outfit Fan Girl, are returning to the live stage after a halted 2020. They released the single, ‘backwards (everything is)’, featuring the incredible vocals of Sydney musician Annie Hamilton, delivering the band’s signature punch and charm, with a bright and warm tone shimmering throughout. They're back and bringing their quirky and somewhat sonically dark discography on the road with Sydney's Bad Pony.