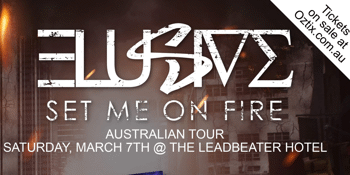 with The Motion Below, In Vanity & Jupiter The Giant
The Leadbeater Hotel (Richmond, VIC)
Saturday, 7 March 2020 7:00 pm
14 days away
18 Plus
Music
Metal / Hard Rock
Rock
Send this event to
Elusive have at long last released their much anticipated debut album “Set Me On Fire”.  With this release comes their power packed east coast Australian tour featuring special guest artists from each state to kick off each night with a bang.
The Leadbeater show in Richmond will no doubt set the roof on fire with an epic line up alongside Elusive featuring The Motion Below, In Vanity and Jupiter The Giant.

Purchase your tickets now at Oztix!