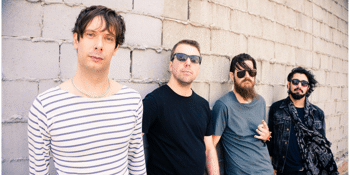 Quiet as a Mouse are an indie/alternative band formed by Alex Moran in Edinburgh, Scotland in 2012. Alex returned to Brisbane in 2019 and formed an exciting new line up. This show on 26th March at The Milk Factory is the Brisbane debut for Quiet as a Mouse. QAAM have previously supported Hinds, The Orwells, Palma Violets, The Big Moon & The Orielles in the UK. As well as worked with both Grammy Award winning producer Liam Watson (The White Stripes ‘Elephant’) and Marcus Mackay who produced Frightened Rabbit & Snow Patrol's early work. They gained UK press coverage and radio airplay and the recording of their debut album 'Is It Funny When It Hurts?' was funded by the Scottish Government.
Support comes from our friends Suicide Country Hour
Spotify - https://open.spotify.com/artist/3hQmZNlWEw8Od7iNLpoNrp
Triple J Unearthed - https://www.triplejunearthed.com/artist/quiet-mouse