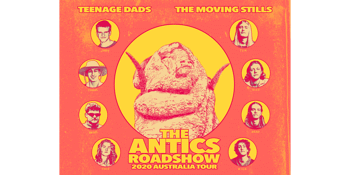 Wrangler Studios (West Footscray, VIC)
Sunday, 26 April 2020 1:00 PM
26 days away
Under 18s Only
All Ages / Under 18’s
Alternative
Indie
Send this event to
Australia's indie rock future is in good hands and for those looking for the next wave, they're coming to a venue near you. Kicking their own goals separately, Melbourne's Teenage Dads and NSW Central Coast's The Moving Stills now team up for a huge memory making mission. Stepping off in WA this March, co-headliner 'The Antics Roadshow' sees both groups combine for shows and shenanigans across four states and one territory throughout March and April.

Prepare to witness The Moving Stills' sweet garage, indie vibes and acoustic driven numbers colliding with Teenage Dads 60s throwbacks and rich melodies during what will be some very special live dates. For Teenage Dads, choosing to go on tour with The Moving Stills was an easy decision. After playing with the band on a few shows together in 2019, they decided they could put up with each other for an extended period of time with the added bonus of exploring new parts of the country. "We're just two young bands getting together, hitting the road and seeing what happens. If there was anything we wanted people to get out of this tour, it would be to look at it and think 'wow, that looks fun," says Vincent Kinna of the band.

With new single 'Adrenaline Rush' arriving next Thursday 20 February, Teenage Dads join the tour already warmed up. They land fresh from an appearance at St Kilda Festival, NYE on the Hill and a national run with Lime Cordiale on their 'Robbery' tour in late 2019. Self-made, self managed and incredibly fun live, Teenage Dads have managed to pump out two EPs and a debut album in just two consecutive laps around the sun. With plenty of juice to land in 2020, the live shows will give fans a first chance to hear more new material to be released in 2020.

The Moving Stills have been anything but idle in the last few months. Their latest single 'Stick Around'saw multiple Spotify editorial playlist additions including Chords + Cardigans and the road trip inspired video for the track recently landed via triple j Unearthed. And next week they'll be triple j Unearthed artists of the week. The band are seasoned live performers, with sets at BIGSOUND, Big Pineapple Festival and Mountain Sounds Festival in their stage arsenal. Working on a debut EP for release in 2020, The Moving Stills are frothing to test out some of the unreleased tunes on audiences across the country as they bring their sticky surf-rock style to 'The Antics Roadshow'.

With two of Australia's most exciting emerging acts teaming up this two for one style event is a no brainer. There's plenty of gas in the tank, plenty of tomfoolery to be had and plenty of great music to be shared. Tickets for 'The Antics Roadshow' featuring Teenage Dads and The Moving Stills are on sale now.