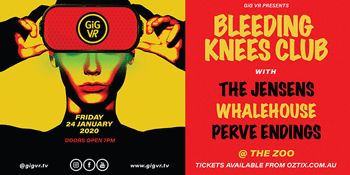 Blurring the lines between real life and virtual reality, GiG VR have announced a series of events with the first to feature veteran lo-fi punks Bleeding Knees Club at The Zoo in Brisbane on January 24th.

GiG VR aims to showcase and promote homegrown Aussie talent with this first ever event to be headlined by Bleeding Knees Club who have just revealed their latest single 'Spin', off the back of their second album 'Fade The Hammer' which stormed into playlists last year.

Designed to be enjoyed IRL or at home, GiG VR captures all the antics of the night's gig with their 360° technology which is then live streamed to those at home, giving those who missed out on tickets a chance to enjoy the show, or punters a chance to re-live the experience from every angle through the GiG VR platform.